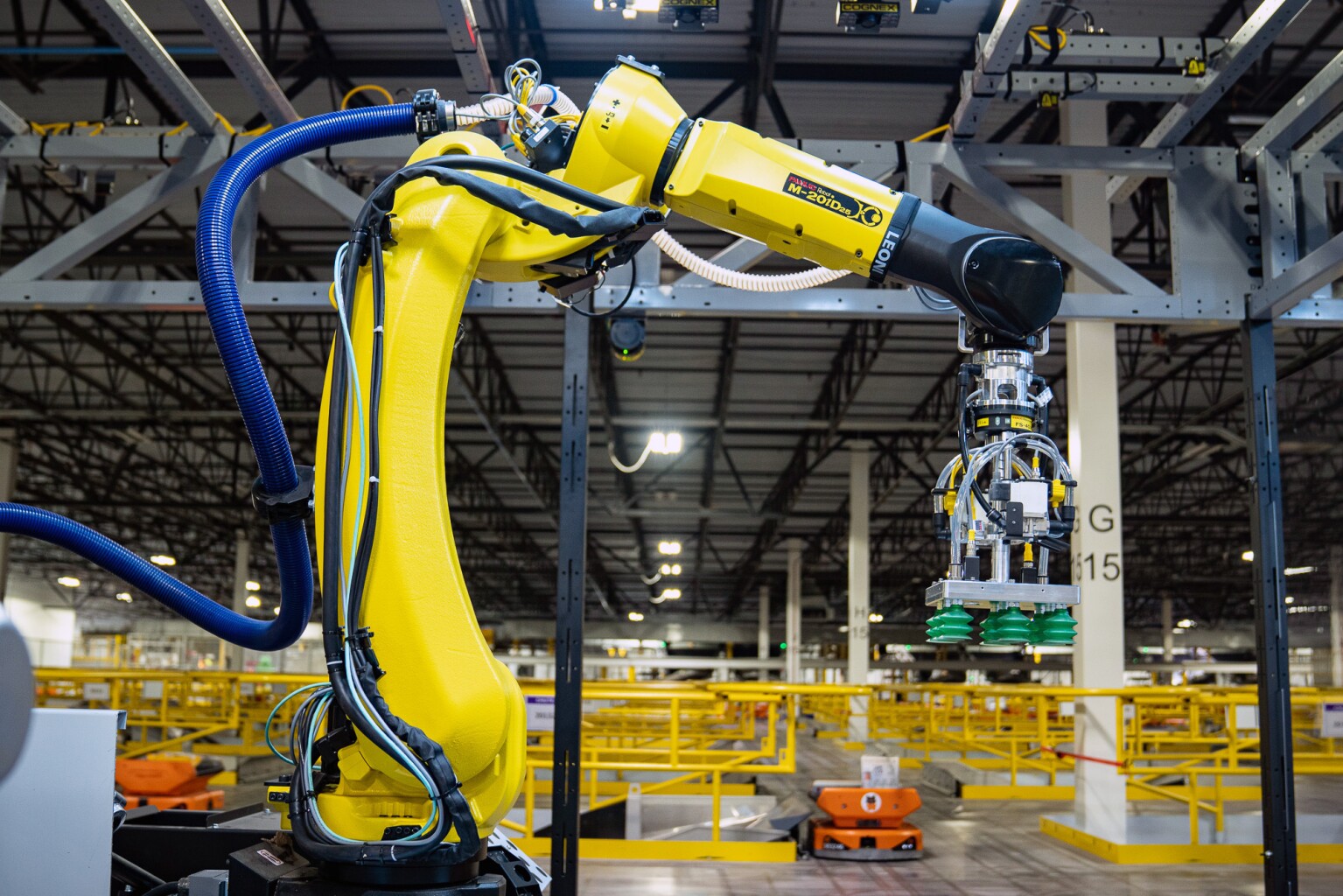 Robin, one of the most complex stationary robot arm systems Amazon has ever built, brings many core technologies to new levels and acts as a glimpse into the possibilities of combining vision, manipulation and machine learning.
Credit: F4D Studio
Robotics

While these systems look like other robot arms, they embed advanced technologies that will shape Amazon's robot fleet for years to come.

Inside an Amazon facility, employees and robots work together to ready products for customers. On one side of the building, yellow tote bins bearing partially completed orders, ride down a conveyor. At the end of the conveyor, a robot arm called a palletizer/depalletizer stacks them on a pallet as if playing a three-dimensional game of Tetris.

When an employee sees a pallet is complete, they approach the immobilized robot, slip a motorized hand truck under the pallet, and route it to shipping. From there, a truck takes it to another facility. There, a different palletizer/depalletizer places the totes on conveyors that guide them to employees who complete the order. On another side of the facility, a jumbled pile of soft mailers and boxes roll down a conveyor belt. Robin, a smaller robot arm, grabs one and rotates the parcel to scan the label. Once it knows the ZIP code, it sorts the package onto a robotic carrier for processing. If it sees any rips, tears, or illegible addresses, Robin transfers the package, via either conveyor or mobile robot, for employees to handle.

Robots are common in Amazon facilities, where more than 200,000 mobile units aid the flow of goods from inventory to shipping. Stationary robotic arms, however, are relatively new. Yet they play an important role in the company's drive to safely deliver the right goods to the right customers at the right time.

“A real gain for the overall system”

Although Robin and the palletizer/depalletizer look like other robot arms, they embed advanced technologies that will shape Amazon's robot fleet for years to come.

Conventional robots often do a single job — welding a section of a vehicle frame or screwing a part into place — whereas for robotic arms like Robin, few tasks are ever precisely the same.

Robin, for example, must calculate how to identify, move, and sort parcels that may rest atop one another as they are presented via a conveyor. The palletizer/depalletizer must calculate how to stack a stable pallet on the fly. To do it, they use both cutting-edge AI algorithms that make decisions in fractions of a second and high-tech cameras, sensors, and grippers.

While the robotic arms aid in the operation of Amazon facilities, they also improve the employee experience by eliminating repetitive lifting, stacking, and turning. In turn, this allows employees to focus on the kinds of assignments that leave robots struggling.

"Eliminating tasks that are repetitious and dull lets employees focus on things that are really important," Tye Brady, chief technologist for Amazon Robotics observed. "If we can elevate our employees to do higher-level tasks that require common sense — something computers are not good at — that's a real gain for the overall system."

This intricate collaboration of people and machines has helped Amazon to deliver goods with fewer mistakes, Brady said. It has also fueled growth and jobs. Since 2012, when Amazon first began deploying robots within its fulfillment centers, the company’s facility workforce added hundreds of thousands of new employees, even before its massive COVID-19 hiring efforts in 2020.

"Amazon could not have achieved what it has done without robotics, nor could we have done it without the amazing skills of our employees," Brady said. "They go hand in hand. If you try to separate one from another, you are going down a failed path."

But before Amazon could blaze that path, it first had to make sure its new robots were safe.

"We don't just build a robot and then say, 'Hey, safety people, I want you to get involved now,'" Brady said. "Instead, safety engineers are there every step of the way, from design and deployment to maintenance and operation. They're at the table talking with us about how we can make it a better experience for our employees."

Clay Flannigan, senior manager, advanced robotics, and the technical lead in the Robin program noted that when robot and safety team members assess the flow of work in Amazon facilities, they insist on solutions that will not compromise safety.

"We work hard to identify any potential hazards," Flannigan said. "That could be anything from limiting any risk for contact between people and the robot, tripping on a floor cable, or a sharp edge on a barrier. Ideally, we can eliminate them with multiple engineering mitigations.”

This is especially important when working with large industrial robots: the best approach is to ensure appropriate access controls are implemented. This starts with fences. To enter the robot area, employees gain access through a secured gate, which positively disables the robot. There is only one gate, which provides strict control over who can access the robot.

In addition to the gate, a light curtain protects the opposite side of the robot. If an employee breaks the plane of the curtain, the robot automatically stops. These safety features ensure that the robot can do its job while permitting safe access to the area for employees to perform maintenance.

Amazon also brings in independent experts to assess the industrial designs. "They ask a lot of good questions,” Brady said. "'Can I approach the station from a weird angle? Could I open the door without the sensors tripping? Can I break the light curtain somehow without the system noticing?'"

Engineers then build and test physical prototypes, monitoring them to see if workers could potentially interact with them in ways that might cause usability issues. They also track metrics about how the machines behave within facilities, which permits continued improvement of their performance.

Robin as an evolutionary step

Robin, one of the most complex stationary robot arm systems Amazon has ever built, brings many core technologies to new levels and acts as a glimpse into the possibilities of combining vision, package manipulation and machine learning, said Will Harris, principal product manager of the Robin program.

Those technologies can be seen when Robin goes to work. As soft mailers and boxes move down the conveyor line, Robin must break the jumble down into individual items. This is called image segmentation. People do it automatically, but for a long time, robots only saw a solid blob of pixels.

Over many years, AI algorithms have learned to break up that blob into individual objects by recognizing things like color or significant features, such as the edge of a mailer. More recently, neural networks have improved enough to do this well. The neural networks are aided in this task by training to segment mailers in a virtual world.

Engineers start by creating a virtual model of the arm and an ever-changing jumble of packages moving down a virtual conveyor belt. In the model, the robot’s AI attempts to segment and grab the items, iterating on each success and failure, and slowly learning to recognize mailers, even when they are obscured or in odd positions. After each session, the model reshuffles the packages randomly and the training begins again.

After thousands of virtual model-training iterations, Amazon tests a prototype at its facilities. "We put together a 1,000-package test set that mirrors the profile of mail we expect to see in the building and run it through multiple times," Harris said. "This gives us good predictive data about how it will perform in the field. Then we test it operationally at select sites, before rolling it out to the entire installed base."

The palletizer/depalletizer is a larger and more powerful machine than Robin, and a marvel of technology in its own right. It also plays a critical role in Amazon’s fulfillment operations.

At Amazon, Brady explains, product always flows toward employees. When someone places an order, a mobile robot brings the goods to an employee. If the order is complete, it is sent to the conveyer to be packed out and shipped to customers’ doors. If not — because no single facility contains the millions of products Amazon sells — the order goes to another facility to be completed.

The best way to ship totes is to put them on a pallet. The palletizer/depalletizer’s job is to stack totes on the pallet when they leave the facility and take them off the pallet and place them on conveyors when they come in. Brady likens the process to playing Tetris.

The palletizing starts with yellow totes parked at the end of a conveyor. All are the same size and oriented in the same direction, and they have been scanned to make sure the correct products are in the tote and the tote itself is in good shape.

The Mechatronics and Robotics Apprenticeship program gives employees the opportunity to apply for an apprenticeship that will train them on the skills and technical knowledge needed to fulfill technical maintenance roles. Find out more.

The palletizer/depalletizer has a two-dimensional camera at its tip, which it uses to rapidly position its arm over the tote. At the end is a custom gripper with four moveable L-shaped elements on each side that slip under the tote's raised upper perimeter. Once it has secured the tote, the robot lifts, pivots, and places the tote on a pallet, using a three-dimensional camera. As it does this, the AI system calculates where to place the tote so that the pallet is evenly balanced and stable. The robot builds six pallets at a time, three on each side, and it moves quickly.

"As the robot builds the pallets, people monitor several robots to make sure everything is going well," Brady said. "When the pallets are complete, they move them out of the cage with a motorized hand truck. You have this rhythm, this dynamic, between our employees and the palletizer/depalletizer, and this keeps all our operations running smoothly."

The increasing reliance on systems like Robin and the palletizer/depalletizer also serves to highlight the symbiotic nature of the partnership between people and robots.

"There's a misconception about the sort of things we can achieve with robotic systems of this type," Flannigan answered. "There's a whole lot of tasks that we just can't solve today with robots alone and they tend to be ones that require higher levels of cognition or dexterity."

In fact, Brady noted, Amazon's facilities work best when people and machines work together: “There's a lot of productivity that involves people and machines working together, and I'm not just talking about one machine. I'm talking about an array of machines in our facilities and how we design those machines to interface with people. We use those machines to help people identify inventory, move inventory, store inventory, and source inventory. That's crucial to our job. Our employees are the backbone of our fulfillment process and we want to empower them with better machines.”

The result, says Brady, is an intricate dance, with people and machines each doing what they do best. It is one of the key reasons why Amazon continues to operate so smoothly and add tens of thousands of new jobs every year. And it’s why Amazon can deliver the right goods to the right customers at the right time.

Get more from Amazon Science
Sign up for our newsletter
Subscribe
Research areas
Tags
Share
About the Author
Alan S. Brown
Alan Brown writes about engineering, technology, and science.